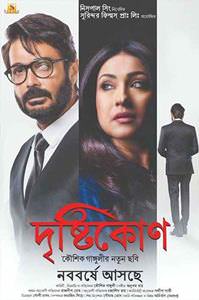 Story: It’s about a lawyer who loses his sight and what he leads.
Jeon Mitra (Prasenjit Chatterjee) leads a simple life with his wife Rumki (Churni Ganguly) until he is confronted with a case involving the murder of Mrs. Moti’s (Rituparna Sengupta) husband, Polash (Kaushik Sen). Which was accidentally killed by his elder brother Pritam. Kaushik Ganguly) and for that he feels guilty but he is innocent which was later discovered by Jeon’s strategy and intelligence. The story is crafted by the very experienced writer Kaushik Ganguly, it is a matter of maturity and skill to be dressed as Jeon and Mrs. Rumki who is the lead in this film. They are all married, professional, experienced and larger than life characters.