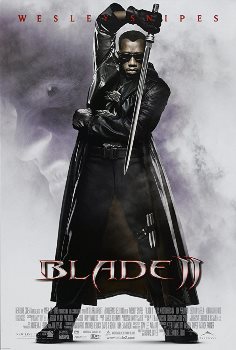 Story: A rare mutation has occurred within the vampire community. cutter. A vampire becomes so infatuated with an insatiable blood craving that they prey on vampires as well as humans, turning victims who are unlucky enough to survive into the Reapers themselves. Now their rapidly growing population threatens the existence of vampires, and soon the world will not have enough humans to satisfy their blood cravings. Blade, Whistler (yes, he’s back) and an arsenal specialist named Scud are eagerly summoned by the Shadow Council. The council reluctantly accepts that they are in a dire situation and need Blade’s help. Blade then enters into an alliance with The Bloodpack, an elite team of vampires trained in all modes of warfare, to defeat the Reaper menace. Blade’s team and Bloodpack are the only lines of defense that can stop the Reaper population from wiping out the vampire and human populations.
After the events with Deacon Frost, Blade continues to destroy as many vampires as he can. A new breed of super-vampire has emerged that poses a greater threat than any evil that currently exists. A group of high powered vampires led by Nyasa and Asad request Blade’s help to kill Nomak. Can Blade work with the things he swore to destroy?